FASHION HOUSE Group – part of Liebrecht & wooD Group, registers yet another record-breaking performance of FASHION HOUSE Outlet Centre Bucharest, as a result of the Group’s strategy to enhance the premium offer of all its outlet centres, as well as the improved economic conditions. In 2016, the first and only professional outlet centre in Romania gained 13 new tenants and significant consumer appetite, materialized in the highest performance levels of the past six years.

After a spectacular growth in 2015, when 10 new tenants joined the scheme, while annual retail sales, spending per head and the average transaction value soared to the highest levels of the previous 5 years, 2016 proved to be even more successful for FASHION HOUSE Outlet Centre Bucharest.

This fast paced progress was supported by some key factors: on one hand, FASHION HOUSE Group’s joint efforts to continuously strengthen the premium offer of all centres in its portfolio, and, on the other hand, the maturing retail market and increased shopping appetite of value-oriented consumers.

“Romanian consumers have an excellent taste for fashion and a specific value consciousness. By addressing both of these two needs, FASHION HOUSE Outlet Centre became a very compelling shopping destination in Bucharest. Now in its 9th year of existence, the first and only outlet project in Romania sees more customers returning enthusiastically, more eager to buy, as they discover the advantage of getting more value from their spending on branded fashion. This trend is well underlined by our 2016 results and we will continue to strengthen the centre’s position on the market, by bringing more premium brands and increasing the overall performance”- states Brendon O’Reilly, Managing Director of FASHION HOUSE Group.

The most significant evolution of the year was marked by the average spend per head, which increased with 22,25% compared to the previous year.

Also, the conversion rate (percent of visitors who buy) is witnessing an accelerating growth rate, proving that people visiting FASHION HOUSE Bucharest find here more and more of what they need. Thus, after a 16% growth in the first semester, the conversion rate surged towards the end of the year, closing 2016 at 69%, a 18,35% increase compared to the previous year.

“2017 also started on positive grounds: the first month of the year was the best January since the opening of the centre, in terms of Spend Per head, Average Transaction Value and Conversion Rate, despite adverse weather conditions. Moreover, with the excellent sales and leasing performance achieved in the past couple of years, FASHION HOUSE Outlet Centre Bucharest is close to full occupancy of phase 1 and we are looking at expanding the retail area in the near future”, states Sorin Ioan Blaga, General Manager of Liebrecht & wooD Romania and Retail Operations Director for FASHION HOUSE Outlet Centre Bucharest. 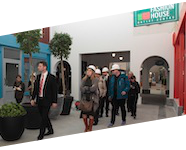 Moscow with +19.5% in sales – FASHION HOUSE Outlet Centre Moscow summed up the business results in the first half of 2019.